The Third Humanity in Harmony-Daniel Pearl World Music Days is set for Sunday October 18 at 2PM at the MacArthur Recital hall at the Flint Institute of Music. The concert will showcase stringed instruments from different cultures stringing diversity together. The project also will feature two master’s programs for students of all ages on Saturday and, for the first time, a featured international journalist.

With recent events in the Middle East, and even here in the U.S.A., we are reminded of how dangerous a reporter’s life can be. Daniel Pearl was a journalist; a reporter for the Wall Street Journal who was killed in Pakistan while reporting on the unrest in that part of the world. The story was turned into the film “A Mighty Heart” starring Angelina Jolie as his widow.

To help focus on this question we will welcome, for the first time, an international reporter as our Journalist in Residence to talk to young people about the importance of reporters bringing news from around the world. The first Humanity in Harmony Journalist in residence will be Gary Lane, a Flint area native and CBN News’ Chief International Correspondent. 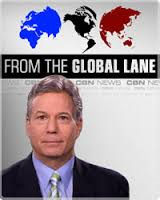 Gary Lane started his broadcast and journalism career while still at Davison High School, and later at WJRT TV as well as local radio stations WTRX, WGER and WKMF. He is a graduate of the University of Michigan-Flint. Since 1984 Lane has led international news coverage reporting from 120 countries. Mr. Lane will address questions like, why it is important to cover news from dangerous places, what precautions he makes when traveling, how reporters, and their families, deal with the very real dangers they put themselves in, and he will talk about Daniel Pearl and how his death affected how reporters work.

For more information and a schedule of the Master’s programs, the Humanity in Harmony Concert and presentations by Gary Lane-Humanity in Harmony Artist in Residence, call the Flint Jewish Federation at (810) 767-5922, email amusser@tm.net, or go to http://humanityinharmony.info

PDF of Press Release: Humanity in Harmony Journalist in residence