With recent events in the Middle East we are reminded of how dangerous a reporter’s life can be. Daniel Pearl was a journalist; a reporter for the Wall Street Journal who was killed in Pakistan while reporting on the unrest in that part of the world. The story was turned into the film “A Mighty Heart” starring Angelina Jolie as his widow.

According to Steven Low, the Executive Director of the Flint Jewish Federation, “Our goal is to encourage people to listen to each other, through music.” The same instruments are played all over the world: guitars, violins, harps. They just sound different when played by people from different cultures. The Humanity in Harmony Concert is a way we can witness that diversity and hear it all in the same time and place.” 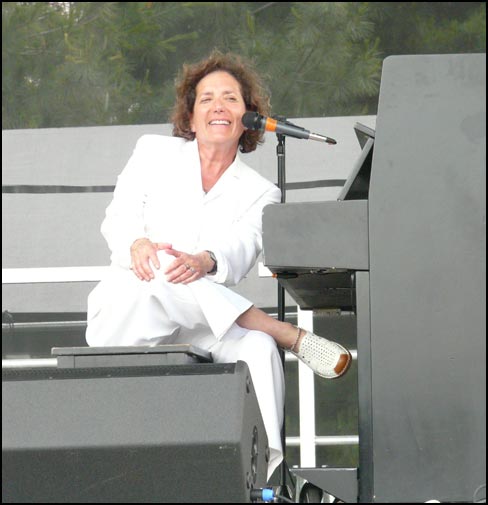 This year’s Humanity in Harmony Concert will once again be an eclectic mix of styles and culture. This year’s headliner is Grammy Award winning singer songwriter Julie Gold, best known for Bette Midler’s version of her song FROM A DISTANCE which won the Grammy for Song of the Year in 1991. Her songs have been recorded by Jewel, Cliff Richard, Judy Collins, The Byrds, Donna Summer, Patti LaBelle and Patti LuPone. She will also lead a master’s clinic on song writing at the Flint School of the Performing Arts on Saturday October 17, 2014.

Also appearing and leading a fingerstyle blues guitar master’s clinic for students on Saturday October 17: the Reverend Robert Jones. This Pastor from Detroit lives and breathes the blues. He is an award winning educator with an encyclopedic knowledge of the history of African American folk music, including the blues, spirituals and slave songs.

Victor Ghannam and Friends bring the sounds of Lebanon and the Middle East. Victor is a self-taught musician who has performed throughout the Americas, Europe and the Middle East. He plays many instruments but is mostly known for his talent on the traditional Oud and Qanoun.

Returning to close the show for the third time is Sheldon Low, an exciting showman and one of the brightest young stars in Jewish rock music. If the Beatles, James Taylor, and John Mayer met at Jewish summer camp, it could end up sounding like Sheldon Low.

Filling out the program will be; the Dort Honors Stringed Quartet, four very talented high school musicians from the Flint School of the Performing Arts, Wanda Degen a virtuoso on autoharp, mountain dulcimer, and hammered dulcimer, and Harpist Brittany DeYoung.

To help focus on this question we will welcome, for the first time, an international reporter as our Journalist in Residence to talk to young people about the importance of reporters bringing news from around the world. The first Humanity in Harmony-Artist in Residence will be Gary Lane, a Flint area native and CBN News’ Chief International Correspondent. More information on the scholarship opportunity is available from the Flint Journal, and from local journalism teachers.

International Conflict Resolution Day is in October and one of the presentations at the Humanity in Harmony Master’s Workshops, on Saturday October 17, will be a program on non-violent conflict resolution; presented by the staff of the Community Resolution Center, of which Jane O’Dell is the Executive Director.

The Humanity in Harmony Concert is part of an international project created by the Daniel Pearl Foundation, and presented with generous support from the Ravitz Foundation and the Community Foundation of Greater Flint.

The Humanity in Harmony Concert is set for Sunday October 18 at 2pm at the MacArthur Recital Hall at the Flint Institute of Music. Tickets are $10 and will be available at the door. Tickets are also available in advance at the Flint Jewish Federation office, 619 Wallenberg St., Flint, MI. For those who purchase 6 or more tickets, in advance, the cost is $8 each. If interested in the master’s clinic with “Julie Gold” and “Reverend Robert Jones”, contact the Flint School of the Performing Arts. For more information or tickets call the Flint Jewish Federation at (810) 767-5922 or email amusser@tm.net. 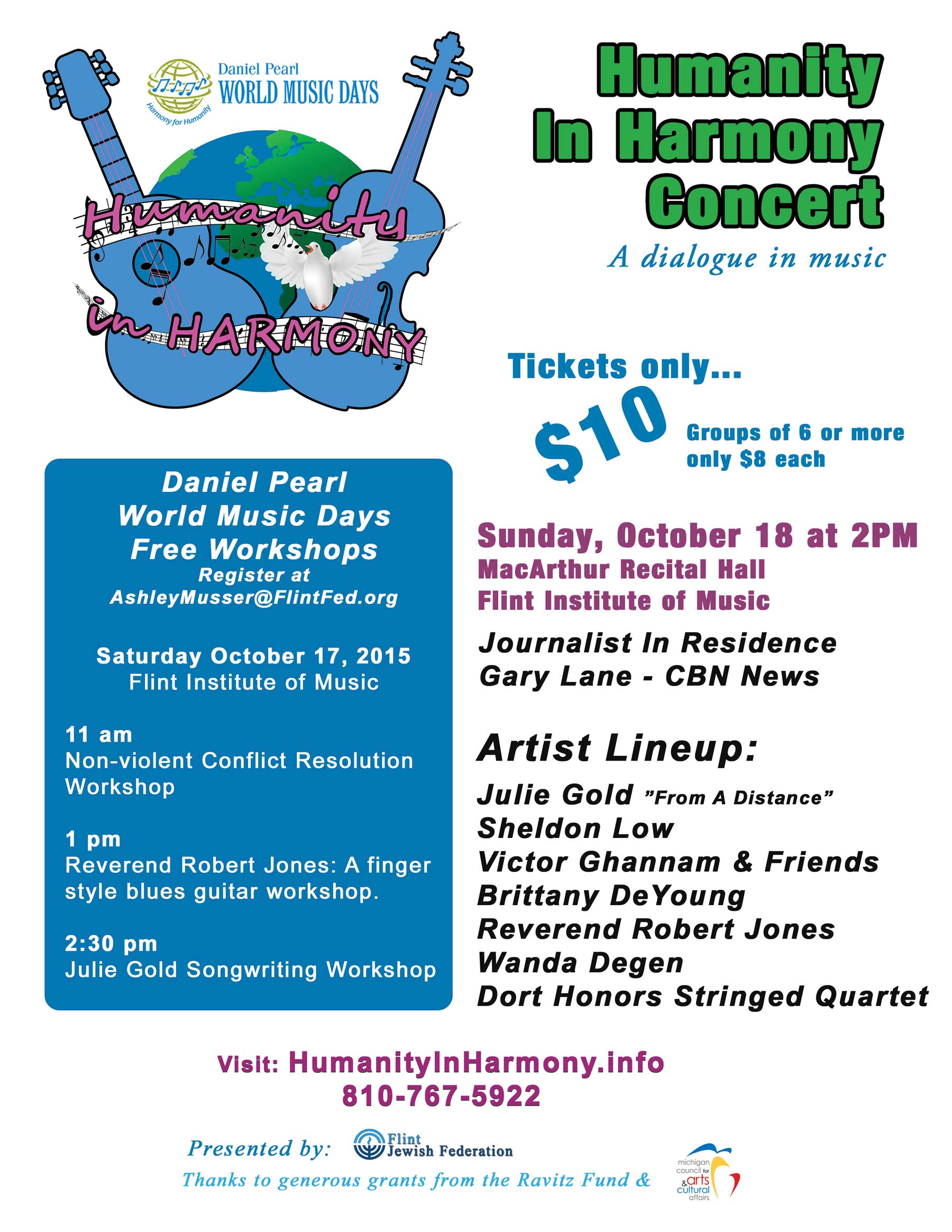